Your Garden Director in 2018 is Christine Watts: 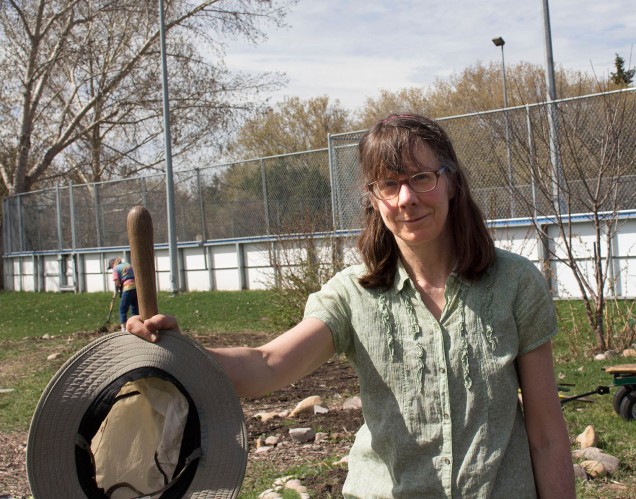 History
Parkallen’s Local Motion project (2009) brought together a critical mass of residents eager to work together on neighbourhood sustainability initiatives. The Parkallen Community League created a new position of Sustainability Coordinator, to which Robert Kirchner was elected. He led a series of sustainability-related film and discussion nights in the summer of 2010 and the group decided to focus on a community garden, incorporating principles of permaculture design, inspired by a similar initiative in the Grovenor neighbourhood, and more broadly by the Greater Edmonton Alliance’s local foods campaign. The group (formally a subcommittee of the Community League) calls itself the Parkallen Diggers (in tribute to the English 17th Century Digger movement, which practised community gardening as a form of nonviolent resistance to the enclosure of common lands).

The original garden plan (called a “Pea Pod Garden” because it looks like a pea pod was created by City of Edmonton landscape architect Gilbert Catabay and Dustin Bajer, master gardener and permaculture specialist, as well as all the people who attended the Parkallen Community Garden Design Charette on March 5, 2011 at the Parkallen Community League. What an exciting design!