Here’s another idea that is frugal, space saving, and environmentally friendly: grow your seedlings in pots made out of folded newspaper. It’s quite simple and you get to reuse *and* recycle while producing your own local food. What could be better than that?

In the past, I have used old seed catalogues and flyers for this. This year, I grabbed a bunch of copies of the Metro out of the recycle bin at my kids’ school. I also cut strips off the edges of the page so that the final product would have nice flaps, but that’s not strictly necessary. You’ll have to experiment.

You want to start with a rectangle, not a square, so that you will have flaps to hold the pot open when you fill it with soil. I also like to double the paper over to make it stronger, since a few weeks of wet soil will make the newsprint quite weak.

Crease an X through the middle of the paper by folding it first one way and then the other: 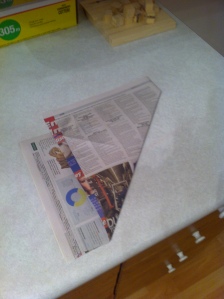 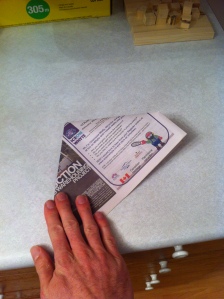 Now fold in the flaps on both sides in two stages: 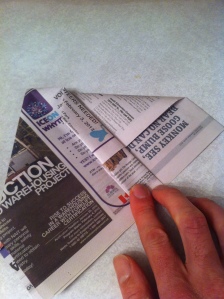 Flip it over and repeat on the other side, so you end up with this: 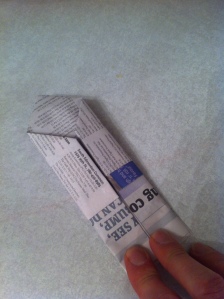 Pick it up and pinch it closed while you fold down the top flaps:

And now gently open it up, and you have a pot for a seedling: 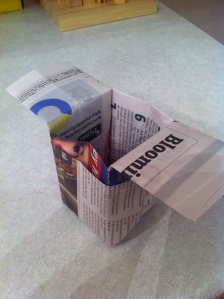 I make these in batches. They wrap themselves nicely in bundles of ten, like so:

Well, I make a few more than that, actually! 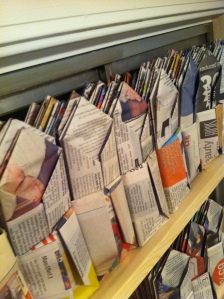 Hey, I didn’t build those shelves for decoration, you know!

A few notes: because they are wicking paper fibre, these pots can dry out quite quickly once the seedlings form a good root ball, so keep an eye on them. You may also want to plant the seeds in plastic trays to begin with for the same reason, but I have grown strong tomato and peppers seedlings by sowing them directly. However, at the beginning, you are more likely to have a problem with too much water, so I recommend that you poke a small drainage hole in the bottom of them as you plant.

When you plant your seedlings out, you can either peel the paper off entirely, or just take off the bottom. In either case, you will disturb the root ball a lot less than you would by pulling a seedling out of a plastic pot.

View all posts by James